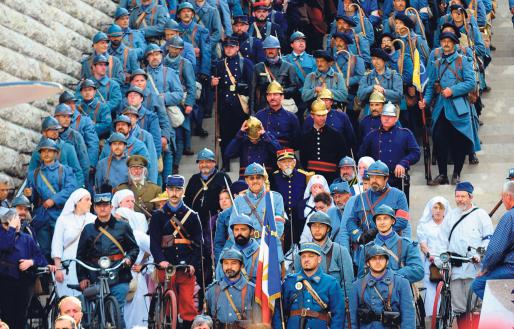 Discover Verdun like you’ve never seen it before ! Near the river Meuse and through its traditional delicacies, Verdun delivers a message of peace and hope !
100 ans spectacle 2018 receptif
The sound and light show “Des flammes… à la lumière” awaits you on every Friday and Saturday evenings from June 22nd till July 28th, 2018 (Except the 14th of July).
Celebrate the 100 years of Verdun with your DMC expert!

D1 Meaux and the museum of the 1st World War
Arrival in Meaux.
Discovery guided tour of the Museum of the 1st World war. The territory of Meaux is characterised by the World War I and more particularly by the Battle of the Marne of September, 1914. This museum, rich in 50 000 objects and documents, allows to approach the world dimension of this conflict, of which we often think as essentially European. 200 complete uniforms representing most of the belligerent countries are thus exposed.
On route to the region of Verdun. Diner. Accommodation hotel 3* Verdun region.
D2 – Verdun And le Fort de Vaux
Departure for Verdun.
Guided tour to comprehend the defence system of the Fortified town of Verdun. Discovery of the defensive architecture imagined by Vauban (Lock-bridge Saint-Amand, Bastions Saint-Paul and Saint Victor) and of the main towers which constituted the Main Rampart of Verdun then visit the underground passages of the Citadel aboard trolley cars.
Lunch.
Guided tours of the fort of Vaux. It is, from the beginning of the battle of Verdun, one of the priority objectives for the German offensive. In the beginning of March, 1916, the Germans, reached a few hundred meters away from the fort and started a hundred day siege. In the Fort, submitted to a flood of gunnery, the resistance got organised. June 1st, Germans reached the Fort: the isolated French garrison with no external support, has lead one of the most heroic fights during a whole week, but was defeated out of exhaustion.

Return to the hotel. Diner. Accommodation.

This trip interests you?
We will be delighted to send you this program tailored to your customers expectations.
Whether you imagine this journey more cultural, culinary, or dedicated to one celebration, our production department will adapt this program and draw it up specially for you.
Looking forward to your quotation requests: mondoramas@mondoramas.com