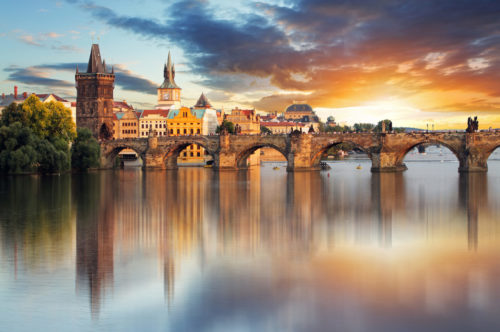 Four romantic and historic capitals of the old Austro Hungarian Empire are highlights on this trip to the heart of Central Europe, where the banks of the blue Danube and fairytale Baroque buildings are never very far away.

Group arrival at Nuremberg Airport where you will be welcomed by your driver. Coach transfer to your hotel. Dinner and overnight in the Nuremberg region.

Leave for the Czech Republic arriving in Prague in time for lunch (at your leisure). Guided tour of the old town on the right bank of the Vltava River, with its mediaeval streets, fabulous Notre Dame de Tyn Church, amazing astronomical clock, and famous Charles Bridge. Dinner and overnight in Prague.

Discover a different side of Prague with a visit to the Hradcany district, named after the old castle – one of the world’s largest and amongst the city’s most impressive landmarks. Free time for lunch then an afternoon at your leisure to explore this wonderful city. Dinner and overnight.

We set off got Brno, Moravia’s capital, with its splendid Baroque monuments. Stop at Mount Zuran where the Battle of Austerlitz was fought, and visit the Museum and stables. Free time for lunch. On then to see Svlakov Castle where Napoleon signed the armistice in 1805, and the Peace Memorial. Continue to the Slovakian capital, Bratislava, for a guided tour of the city lying on the banks of the Danube, and its lovely Baroque buildings. Dinner and overnight in Bratislava.

Today’s itinerary takes us towards the grandiose Danube Bend. Meet up with your guide and first stop Esztergom, the old capital of Hungary, with its stunning neo-classical Basilica. Then on to Visegrad, on the Danube Bend, onetime Royal residence. Free time for lunch during the day. Continue to Szentendre and its seven churches. Dinner and overnight in Budapest.

Guided tour of Budapest, one of Europe’s most beautiful cities, taking in the Castle district, the Fishermen’s Bastion terrace with its seven towers overlooking the river, and the Matthias Church. Free time for lunch. Direction Sopron near the Austro-Hungarian border and free time to explore the lovely old town, before we continue to Austria, and dinner and overnight in Vienna.

A day dedicated to the delightful city of Vienna and a guided tour starting with the impressive Schonbrunn Palace, once home to the Hapsburg dynasty and one of the cities most important cultural monuments. Free time for lunch then more sightseeing taking in the Hofburg Palace, the Opera and the Cathedral of St Etienne. Dinner and overnight.

A guided excursion to the Vienna Woods stopping at the Mayerling Hunting Lodge, scene of the mysterious death of Crown Prince Rudolph in the 19th Century. On then to the Abbey of Heiligenkreuz, or Holy Cross, one of the world’s oldest Cistercian Monasteries. Free time for lunch. Our route continues west towards Salzburg. Dinner and overnight in the Salzburg region.

Set off for Munich and a guided tour of the town: the Cathedral, with its unmistakeable onion domed towers, the Marienplatz, Munich’s main square and the heart of the city, and the fabulous old Townhall. Free time for lunch. Then a free afternoon to enjoy the English Garden which stretches as far as the town centre alongside the Hofgarten, or Court Garden, and the imposing former Royal Palace, the Residence. Dinner and overnight.

Breakfast. Coach transfer to Munich Airport. End of our services.

9 nights on half board (dinner, and buffet breakfast – not including drinks) in three star hotels

Local coach for the duration of the itinerary

Our selection of Tours, Coach included.

Discover as well:
Prague, bohemian charm
Budapest, the Queen of the Danube
Czech Republic :The Magic of Prague and Bewitching Bohemia