* Europe – The Adriatic sea : trip in Europe making a splash in five countries for a group trip 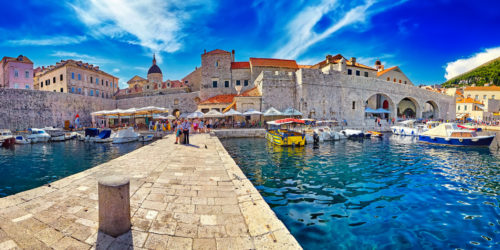 Fall in love with the Adriatic on a trip in Europe that takes you through Slovenia, Croatia, Bosnia-Herzegovina, Montenegro and Albania. From the legendary Mostar Bridge at Kotor to the minarets and mosques of Sarajevo and Bosnia’s untamed mountains, you’ll be enthralled by the wealth of wonders of the Balkans as well as the diverse beauty of its landscapes and numerous national parks.Highlights of this trip in Europe: Lunch : Croatian specialitiesDay cruise from Dubrovnik to Split to discover in a group trip.

D1 Ljubljana
Arrive in Ljubljana. Meet with your tour guide. Dinner. Board in Ljubljana.
D2 Slovenia : Ljubljana and Zagreb (150 km)
Guided tour of the Slovenian capital, during which you’ll explore the Triple Bridge, the Saint Nicolas cathedral and the Fountain of the Three Rivers. Depart for Zagreb. Lunch on the way. Guided tour of Zagreb: the baroque charm of the winding streets and palaces in the upper town, and the hustle and bustle of Jelacic Square in the lower town. Dinner. Board.
D3 Bosnia : Slavonia and Sarajevo (450 km)
Set off for Bosnia via Slavonia, Croatia’s vast farming plain. You’ll pass through the baroque town of Pozega, nestled deep amongst the vineyards and hills, as well as Stara Kapela with its traditional houses and farms. Lunch of regional delicacies. Continue on to Slavonski Brod and its Austrian citadel, the gateway to Bosnia. Minarets, mosques and mountain forests dot the landscape as you veer ever closer to Bosnia’s capital, Sarajevo. Dinner. Board in Sarajevo.
D4 Sarajevo and Mostar (140 km)
Guided tour of Sarajevo. Explore the great mosque, the cathedral, the Austro-Hungarian quarter and the national library. Lunch. Set off for Mostar. Guided tour of the historic old town, the bazaar and traditional ateliers, the mosques and old Turkish houses. Dinner. Board in Mostar.
D5 Croatia : Dubrovnik (145 km)
Breakfast. Depart for Dubrovnik. Lunch followed by a guided tour. Caressed by the gentle lapping of the Adriatic, perched atop a craggy rock and encircled by imposing ramparts, Dubrovnik was once known as Ragusa, and is considered to be one of the world’s architectural gems. Dinner. Board in Dubrovnik.
D6 Montenegro : Buvda and Cetinje (165 km)
The unspoiled mountains of Montenegro unfurl as you make your way down to the Buvda Riviera, a truly exceptional spot on the Adriatic coast. Wander down the streets of this beautiful fortified town. Lunch. Set off for Cetinje, the historic capital huddled at the foot of Mount Lovcen. Explore the hidden treasures the town has to offer: the Biljarda, King Nicolas’ old palace, the Royal Palace, the Blue Palace, the monastery… Dinner. Board in the Buvda area.
D7 Exploring Albania (160 km)
Day trip to Albania. Stop off in Bar to admire its two thousand year-old olive tree. Arrive on the Albanian shores of Lake Skhöder, the biggest of its kind on the Balkan peninsula. Guided tour of Skhöder old town. Lunch on the road. Return journey via Ulcinj, a picturesque spa town in Montenegro, known for its beautiful beaches – notably the 13km long Velika Plaza. Dinner. Board.
D8 Kotor Bay (110 km)
Day devoted to enjoying the Montenegrin coast and the famed fjords of the Adriatic Sea : Kotor Bay. Trip to Kotor town, surrounded by imposing Byzantine walls. Explore the clock tower, the Sveti Tripun cathedral, the narrow cobbled streets and exquisite palaces. Lunch on the road. Continue on towards Croatia. Dinner. Board in Dubrovnik.
D9 Cruise from Dubrovnik to Split (215 km)
Embark in Dubrovnik for an unforgettable cruise along the Dalmatian Coast. Move over to starboard for breath-taking views of the Elaphites, an archipelago of 14 islands, and then portside to see Mljet Island and the untamed beauty of its national park. Lunch on board. Continue to Korcula, Hvar and Brac, arriving in Split in the late afternoon. Dinner. Board in the Split area.
D10 Split and Trogir (90 km)
Guided tour of Split, capital of Dalmatia. Immerse yourself in over two thousand years of history: the old town and port, the seafront promenade, Diocletian’s Palace. Lunch. Guided tour of Trogir, a medieval gem. Continue on to the small medieval town of Sibenik, clinging to the hillside and overlooking the sea. Dinner. Board in the Sibenik area.
D11 Sibenik and Krka National Park (80 km)
Guided tour of Sibenik old town and its steep, winding streets, magnificent Gothic palaces and its UNESCO-listed World Heritage cathedral. Lunch followed by a trip to Krka national park and its fantastic waterfalls. Dinner. Board.
D12 Zadar and Rijeka (330 km)
Guided tour of Zadar. Cusped by the sea on three of its sides, the city is home to a plethora of historic vestiges that tell the tale of over two thousand years of history. From the Roman forum to its baroque treasures, without forgetting the sublime Roman churches and fortifications. Continue on to Rijeka. Lunch en route. Dinner. Board in the Rijeka area.
D13 Ljubljana (115 km)
Depart for Ljubljana.


Ask for a quote