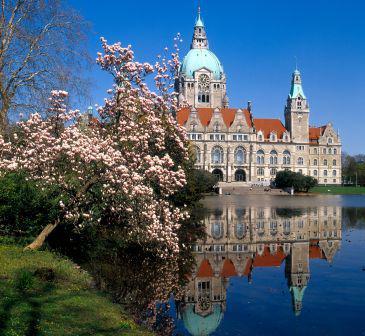 Thinking Germany, think Goethe and Schiller, or Bach and Liszt. Come an in this grand tour around Writers and musicians that have made their mark, splendours of the ancient Prussian Empire, fairytale Bavarian baroque architecture and the vibrant and incomparable history of modern day Berlin… Germany is a potent cocktail of culture in the heart of Europe that’s waiting to be discovered.

Begin of the tour for the group which arrives in Cologne. Guided tour of the old centre of Cologne, with its mediaeval houses and an incredible cathedral. Dinner and overnight in the Cologne region.

Set off for Hanover, which hosts a large number of annual trade fairs. Lunch then a guided tour of the town. The market square is home to the huge, gothic, 14th century Market Church, and nearby are the old and new Town Halls, city landmarks in their own right. The Hanover Opera House is a fine example of neo-classic architecture. Dinner and overnight in the Hanover region.

Leave for Hamburg and lunch on arrival. Guided tour of the port, one of Europe’s busiest. On to the warehouse district with its pleasing red brick buildings, many of which have been reconverted into bars and taverns. The gothic style St Catherine’s Church is one of the city’s oldest buildings. On option is a tour of the port by boat. Dinner and overnight in the Hamburg region.

Depart for Potsdam. Lunch then a guided tour of the Sans-Souci Palace and gardens, built as a retreat for the Prussian ruler and as a mini rival to France’s Versailles Palace. Entry to the larger New Palace, a great baroque structure to the west of the park, is included. Continue to Berlin for dinner and overnight.

A day to explore Berlin, in the company of your touristic guide, starting in old West Berlin with the city’s best known shopping street, the Ku’damm, and the iconic Kaiser Wilhelm Memorial Church, the Charlottenburg Palace and the historical ‘Reichstag’, or Parliament Building, with its new dome and roof terrace. After lunch time for a cruise on the river Spree then you are free to explore at leisure. Dinner, or perhaps experience a traditional music evening in a local eaterie (option). Overnight.

Leave for Dresden and lunch on arrival. Guided tour of this charming town, christened Florence of the Elbe. A cruise on the River Elbe is optional. Dinner and overnight in the Dresden region.

Destination Weimar, famous for its cultural heritage and home of Goethe and Schiller. After lunch, guided tour of the old town, where you can see the German National Theatre and the Wittum Palace. Continue to neighbouring Erfurt and a guided tour to take in its preserved mediaeval centre, known for its churches, graceful Renaissance buildings and especially the unique ‘Krämerbrücke’, or grocer’s bridge, lined with half-timbered houses on either side. Dinner and overnight in the Erfurt region.

Leave for Frankfurt, seat of the first elected German Parliament and symbol of German democracy. Lunch then a guided tour of Goethe’s birthplace whose significant monuments include the Kaiserdom Cathedral, and the red sandstone Church of Saint-Paul where the National Assembly first met. Dinner and overnight in the Frankfurt region.

This trip interests you?
It is with pleasure that we shall send you this program adapted to the expectations of your customers.
You imagine it cultural, gastronomic, or around one celebrates, our production department will develop and will adapt this program.

Our selection of coach Grand Tour for groups

Supplement for Berlin restaurant and entertainment: 11€