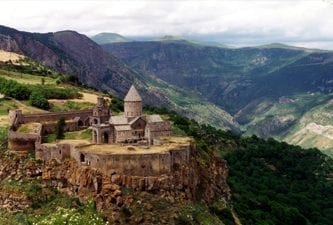 Prix : 1€ Ask for a quote
All inclusive trip in Armenia with your DMC.
According to the Bible, Noah’s Ark ran aground at the top of Mount Ararat.
The little son of Noah, Hayk, gave the country its name: Hayastan.
His descendants, the Armenians still call them the Hays.
Armenia was the smallest of the 15 republics of the USSR and today occupies a low-part of historic Armenia. Armenians lived an eventful history, fraught with invasion, destruction and massacres. But the stubbornness of this people, clinging to their land despite the terms of a thankless very rugged mountainous region, hot and humid in the east, very dry across Lake Sevan (1,300 km ‘) to the foot of Ararat (5156 m, Turkey), he has kept intact its culture and faith.

Day 1: Arrival in Yerevan – transfer to the selected hotel

Early morning arrival in Yerevan – transfer to the selected hotel.

Yerevan sightseeing including City center, Republic square, State University, City panorama, Cascade, Parliament, President’s Palace, Opera, Matenadaran (depository for ancient manuscripts); Sports & Concert Complex, visit to the Genocide Memorial, dedicated to the Victims of 1915 and the Genocide Museum.  Visit to the ruins of Erebuni fortress, founded during the Urartian Kingdom by King Argishti in 782 BC and the Erebuni museum (1968) with Urartian period exhibits. Erebuni has been renamed into Yerevan since the 7th century A.D., when it was the capital of Armenia. The program includes lunch in a local restaurant.

Breakfast at the hotel. Drive to the only remaining pagan temple in Armenia devoted to the God of Sun – Myrth, in Garni, built in 77 AD by King Trdat (Arshakid Dynasty). The temple is Greco-Roman style with characteristic pillars. It stands proudly on a rocky ridge with a deep canyon presenting a beautiful view. The temple was a summer residence for Arshakid dynasty. Visit to the ruins of Royal Palace and Royal bath-house nearby. Drive to the unique caved temple St. Geghard (12th -13th cc.), the name of which means “holy spear” in the honor of the long-preserved spear, the same spear that pierced the body of crucified Christ. It is now exhibited in the museum of Etchmiadzin Cathedral. Geghard Monastery is included in the UNESCO World Heritage list (2000). The program includes family hosted lunch in village house and watching of “Lavash” (Armenian traditional flat bread baked in stone-make oven) making process.

Breakfast at the hotel. Visit to Khor Virap Church – the place of imprisonment of St. Gregory the Illuminator, who stayed here in the small dungeon for 13 years without any food, accused by the Armenian King of preaching Christianity. Khor Virap Church was built on the dungeon and now people have a chance to go down into the dark pit themselves. It is one of the holy places for the Christian world. Here is also the closest and most spectacular view of the gorgeous biblical mountain Ararat shining with its two white peaks. The hills adjoining Khor Virap were the site of the early Armenian capital – ancient Artashat built by King Artashes I, founder of the Artashesid dynasty, around 180 B.C. It is one of the few ancient towns, built by the special design of the famous Carthaginian general Hannibal. After the defeat in a war against Rome, he found shelter in Armenia…After visiting Khor Virap drive through the spectacular canyon between the red rocks toward Noravank Monastery (13th c.). Tour to “Areni” Winery/ wine testing. The program includes lunch in a local restaurant

Breakfast at the hotel. Drive to mountainous resort Dilijan, visit to Haghartsin Monastery complex (13th c.), including Church St. Stepanos, St. Mary and St. Gregory’s Church, as well as famous refectory. Appearing unexpectedly, out of the thick forests, in front of the visitors, the Monastery creates a magical impression of the lost world. Drive to Sevan, one of the greatest high mountainous freshwater lakes of Eurasia, visit to Sevan Monastery (9th c.). The program includes lunch in a local restaurant, tasting the fish freshly caught from the lake.

Day 7: Yerevan – Visit to Cognac Plant and Armenian Central Market
Breakfast at the hotel. Visit to Famous Armenian Cognac Plant with tasting of famous Armenian Brandy. Visit to Armenian Central Market. Free time in Yerevan.
Day 8: Ashtarak – Oshakan – Saghmosavank – Alphabet Park
Breakfast at the hotel. Trip to the village Oshakan via town Ashtarak. Visit to the Church St. Mesrop Mashtots, the inventor of Armenian Alphabet, and his gravestone. Drive to the Saghmosavank Church (13th c.) where the beautiful view of Kasakh river canyon can be spotted. Visit to Alphabet Park, a location where all letters of Armenian alphabet made from tuff of human-size are scattered around volcanic stones. The program includes lunch in a local restaurant.
Day 9: Transfer to the airport for early morning flight
–